These are the Facts, Everything Else is a Scare Tactic

The month of August 2018 marked an important milestone for the long-running bull market.  It was 10 years ago this month, that the worst financial recession since the great depression reared its ugly head.  Fast forward to this past August 22, the bull market, as measured by the S&P 500 Index, extended its run to 3,453 calendar days (CNBC, various sources), becoming the lengthiest bull market in history, or at least since WWII.

While we may celebrate the milestone, let’s take a moment to review where we’ve come from.

Before I go on, I believe a couple of definitions are in order.

First, a bull market is generally measured from the lowest point in a cycle to its peak. The peak can only be defined in hindsight, when the market has declined by at least 20% from its prior peak. That decline is widely considered to be a bear market–the second definition.

There’s no way to sugar coat it. Late 2008 and 2009 was a bleak time for investors. Brought on by a financial crisis, the economy was sliding into a deep recession.

Companies were quick to jettison employees, and corporate profits fell sharply. But, as we’ve seen time and time again, stocks found a bottom, a new bull market emerged, and the economy turned around.

Few could have predicted the current cycle would run as long as it has. Or, for that matter, run up as high as it has.

While not the best performing, the current run has advanced 329%, as Table 1 shows below.

What makes a bull market–a look behind the curtain

The themes that are driving shares today have been in place to varying degrees since the economy bottomed in 2009–economic growth, profit growth and low interest rates.

For much of the expansion, economic growth hasn’t been stellar, but it has lifted corporate profits, which are at record levels today (Thomson Reuters).

But let’s not completely discount the role of the Federal Reserve. In order to jump start the economy during the debilitating recession, the Fed pushed interest rates to rock-bottom levels, and it has been slow to raise rates.

Why does this lend support to stocks? Low interest rates encourage investors to look to other assets for income and capital appreciation. Put another way, low rates offer less competition for stocks.

Throw in low inflation and the continued stream of stock buybacks from corporations (S&P Dow Jones Indexes), and powerful forces have come together to lift shares.

There has been no shortage of headwinds that have temporarily interrupted the bull market or, at a minimum, created concerns over the last 10 years.  After all, the old adage is “Stocks must a climb wall of worry”. 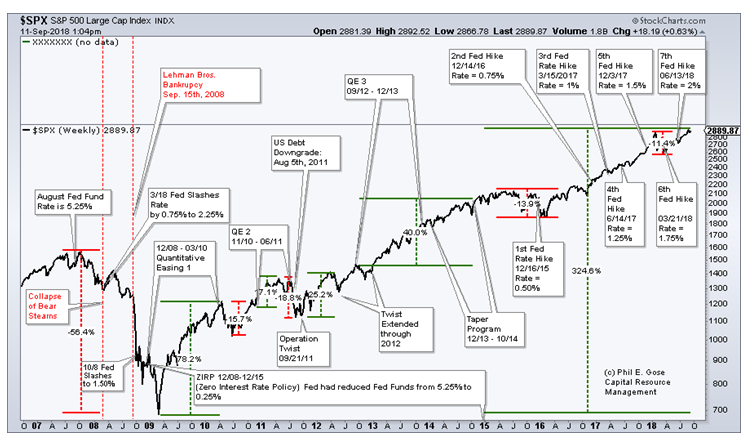 QE1, ZIRP, QE2, the downgrade of U.S. debt, Operation Twist, QE3, the Fed Taper Program, Financial turmoil in Europe, the U.K.’s Brexit vote, the collapse in oil prices, Fed rate hikes, worries about China’s economy, and the 2016 U.S. election were just some of the “Wall of Worry” headwinds that surfaced in the chart above that lead to short-term volatility.

When headwinds have failed to throw the U.S. economy into a recession, the focus has shifted back to the positive economic fundamentals, and the bulls prevailed.

Looking longer term, the bulls have always triumphed–eventually. Those who have bet on a long-term slide in stocks have been sorely disappointed.

If we open our history books, the Dow Jones Industrial Average was below 100 in 1915. Today, it’s above 26,000. Even if adjusted for inflation, the Dow is up over tenfold (Macrotrends).

In the end, the bulls win. Why? Short downturns in the economy–recessions–are followed by economic expansions that run much longer than recessions. Over time, the economy’s value rises. It’s been that way for over 200 years.

We recommend very diversified stock portfolios; ones that include the major sectors of the economy. Investing in a diversified portfolio is much like buying a stake in the U.S. economy.

The economy may or may not be larger next year, but history tells us it will be larger 10 or 20 years from today. Continuing along that same road, the major market averages are likely to follow a similar trajectory over a long period.

That doesn’t mean we won’t see a sharp sell-off from time to time. It doesn’t mean that stocks will necessarily match the economy’s performance over a short period. But it does mean there is a long-term upward bias for stocks.

If you have a question or would like to talk about your investments, that’s what we’re here for. We are simply a phone call or email away.

The longevity of today’s bull market has rewarded patient and disciplined investors. We talk about the investment plan at length because it is the roadmap to your financial goals. We stress this fact often. But it also helps pull the emotional component out of the equation.

You know, the one that tempts us to sell when the market pulls back. Or, for that matter, may encourage us to get too aggressive when stocks surge higher. The plan enforces a disciplined approach.

Disciplined investors succeed when the plan is built on a solid foundation.

A disciplined approach, coupled with an investment plan built on solid, historically proven principles, has historically been the best path to meet one’s goals. 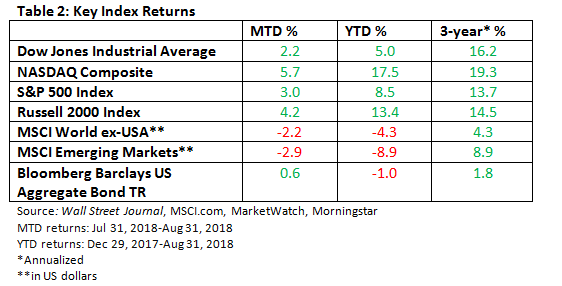 I hope you’ve found this review to be informational and helpful. As always, I’m honored and humbled that you have given me the opportunity to serve as your financial advisor. If you have any concerns or questions, please feel free to reach out to me, I am as close as the nearest telephone. That’s what I’m here for.